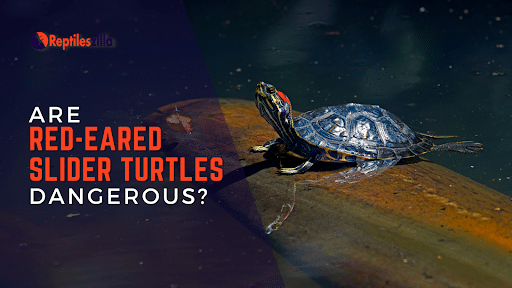 Turtles are becoming more and more popular among pet owners, and Red Eared Sliders because of their adorable and colorful build attract more pet keepers. However, potential pet owners might have questions about whether they bite or are dangerous.

What is dangerous about the red-eared slider?

Red-eared sliders are not dangerous, and won’t hurt you. However, the real danger of keeping a red-eared slider turtle comes from the salmonella that young turtles are carrying in.

Salmonella is an illness caused by salmonella bacteria. Some people carry this bacteria without getting sick while other people get sick from it. People get salmonella poisoning by eating or touching things that have been in contact with the feces of a turtle, such as their food bowl or tank decorations.

What makes it worse is that even though young turtles carry this dangerous bacteria, you cannot tell if they are carrying it because their immune systems are too weak to show any symptoms.

The safest thing is to wear gloves while handling and feeding the red-eared slider turtles so you are away from any danger salmonella possesses.

As you may know already, turtles can bite. But do not let this be a deterrent to getting a turtle as a pet. Because red-eared slider turtles don’t bite just for fun. Instead, they only take the adverse action when they have no other options left. That’s why biting is a behavior that can be averted if they are handled with proper care and are not feeling scared.

Red-eared sliders are among the most popular types of reptile pets, along with other reptiles like bearded dragons, ball pythons, leopard geckos, and crested geckos. If you have decided to have a red-eared slider turtle as your pet, rest assured that it will most likely be the best pet you have ever had.

Red-eared Slider turtles are often very friendly, almost similar to dogs. Red-eared sliders can recognize their keepers and can be trained as well. While they can be trained to come when called or even eat out of their owner’s hand, it is important not to startle them. If injured, they will lash out with their razor-sharp claws and powerful jaws.

Why red-eared turtles dangerous for other native species?

The red-eared turtle is one of the most popular pet turtles in the United States and has been sold in the country since 1963. This reptile has a very wide range, being distributed from south Florida and Texas in the USA to South America. In its natural habitat, it prefers rivers, ponds, and swamps with abundant aquatic vegetation, but in the USA it has adapted to still water bodies like farm ponds, canals, and pools.

When the turtles are kept as pets, they are often housed in aquariums. Traditional 10-gallon aquariums are not large enough to house them for their entire life span of 30 years or more so people release unwanted red-eared turtles into the wild where they compete with native species for food and habitat.

The US government gave three reasons why releasing these turtles into the wild is a problem:

In case the pet turtle has been released in a body of water with naturally occurring alligators, no predators would be a problem to the offspring, but in case it is released in an area without large predators, many eggs and juveniles will be eaten by raccoons, skunks or birds.

The Florida Fish and Wildlife Conservation Commission (FWC) regards the release of pet turtles as an act of littering. Pet owners who want to get rid of their turtle can turn it over to a pet retailer or a rescue facility.

Is turtle Pee harmful to humans?

Umm, not actually. It’s a myth that has been passed around by those who don’t research before they write. The idea was even used as the plot for an episode of CSI: Crime Scene Investigation (Season 7).

In fact, it’s been around for many years when someone made mention of it in Usenet group rec.games.frp.misc. However, the myth of ‘turtle urine’ is a particularly silly one and medically inaccurate.

As per the myth, Turtle urine can cause severe and irreversible brain damage if it comes in contact with human skin. As of yet, there has been no research backing this claim which is why this Is something we need not be concerned about.

However, this does not mean you let turtles pee on you while handling them. Because pee itself is a bacteria containing liquid. Just like the excrement of other animals, it contains the body’s metabolic waste products which can be harmful for humans especially children and pregnant women. So to be on the safe side, always wear protective gear while handling your pet.

Yes, so now you can all rest easily. You are not getting brain damage from a pet turtle.